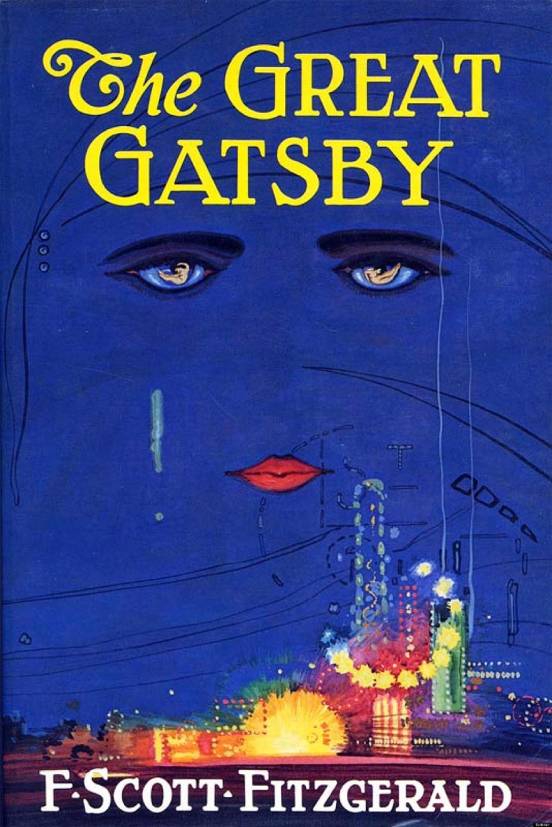 Arguably the most famous cover in American literature, the original dust jacket of The Great Gatsby sets the novel’s title and byline atop a painting by Spanish artist Francis Cugat, his first and only work to be used in publishing.

Called Celestial Eyes, the painting is sometimes cited as a literal representation of Doctor T. J. Eckleburg, the billboard optometrist who eyes are described as “blue and gigantic” in Chapter II. Or, more likely, of Chapter IV’s description of Daisy as a “girl whose disembodied face floated along the dark cornices and blinding signs.”

Regardless, the current consensus is that the striking image did not simply arise from Cugat illustrating a resonant bit of finished prose. Rather, it was Fitzgerald who, upon seeing an early sketch of the painting, actually incorporated the image into his work. (In a prepublication letter to the book’s editor, Max Perkins, Fitzgerald wrote, “For Christ’s sake, don’t give anyone that jacket you’re saving for me. I’ve written it into the book.”)

Cover origins aside, the novel The Great Gatsby was a commercial disappointment in Fitzgerald’s lifetime, and the Gugat’s painting was dropped from subsequent editions. (A notable detractor was Fitzgerald’s frenemy Ernest Hemingway, who felt the cover suggested a science fiction novel and actually removed the dust jacket before reading it.)

Due in part to free, mass distribution of the novel to American soldiers during World War II, however, The Great Gatsby eventually rebounded in both readership and acclaim. Given the book’s growing popularity—a film starring Robert Redford had been released in 1974—Charles Scribner’s Sons brought back the original cover in 1979, thereby permanently reestablishing its association with the novel.

The sparkling lights. The haunting eyes. The ghostly bandeau. The green light reflected in the tear.

What exactly is the deal with the naked women in the pupils?